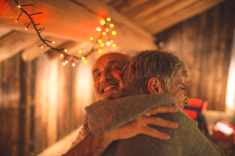 Secret to a Fulfilling and Healthy Life

St. Vincent de Paul, a man who was sold-out to the service of God through his concern for the poor, once said, “If you love the poor, your life will be filled with sunlight, and you will not be frightened at the hour of death.”

So many incredible human beings, living on-purpose lives, understood a principle that could not only bring happiness to a person, but, as research now demonstrates, also can give you an extraordinary healthy life.

It is daunting when you learn about the heavy hearts of people that you pass each and everyday. People weighed down with worries, fear, anxiety, responsibilities and losses. People living with tremendous loss or lack. It can be overwhelming and many people are left wanting to help but they don’t know where to start. Whether you find yourself just wanting to make a difference or you are one of the people who could use a boost or maybe you are a little of both; let me offer you some encouragement. There is a healing salve that can be applied, that has medicinal, health-enhancing benefits for your body, mind and soul. The best part, aside from it being essentially free, is that it literally is as contagious as the ‘common cold’ and literally multiplies from the moment you apply this healing salve to someone who is hurting; allowing you to knowingly have a positive impact on the world we live in. Doesn’t that sound good???

Incredible research has been conducted at UCLA and other forward-thinking research Universities, that is literally turning heads in the research community. Research is being conducted on the profound benefit of the healing salve of COMPASSION and KINDNESS. Let me boil down some of the nuggets that have come out of the research.

The National Institute of Health conducted a brain-imaging study where they found that pleasure centers within the brain, areas that become active when we experience pleasure, become active when we observe an act of generosity or perform such an act ourselves. The interesting thing about it is that these areas seem to become even more excited than if we received the money ourselves.

The list of benefits to self, according to the research, can go on-and-on. In addition, the research also indicates that compassion and kindness can be an effective buffer for stress, increase longevity, improve happiness, enhance cognitive performance and be an opponent force to depression and anxiety.

How can it get better than that?? Well, it can! Here is another amazing benefit. You are literally making the planet a better place! Even the smallest acts of kindness, whether random or otherwise, have been clearly demonstrated to positively effect the neurophysiology of not only the person who is on the receiving end of the act but also effecting anyone else they tell or who witnessed the act. Here’s the cool thing. The people on the receiving end of your kindness, are significantly more likely to perform acts of kindness for other people throughout their day and life, according to researchers. Your act of kindness is literally rippling through the world!

If you ever feel down or find yourself frustrated at people, the world, circumstances; don’t give up! Throw a compassionate stone of kindness into the pond of life and rest assured, the ripples ARE making a difference!!!