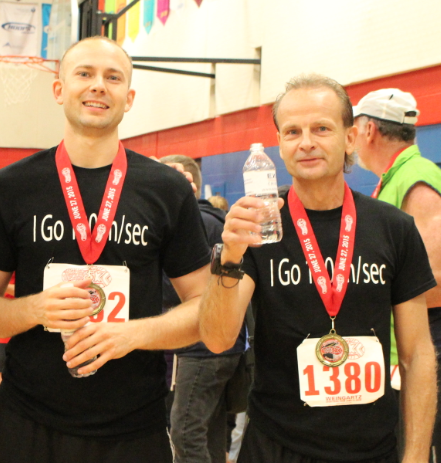 This past Saturday marked the 4th Annual 5K “Run the Plank” Race and what a great time that it was. Eximius Chiropractic is so honored to, not only be able to participate as a team, but to also support this very worthy and God-honoring cause.

It really is amazing to reflect on the compassion, kindness and commitment that was required to make this event happen. The countless number of volunteers that were needed at various stages of the race, registration and even in the planning, which started long before the race was ever on the calendar of the participants. It was nothing short of awesome to be around people who were so willing to serve and raise money for some very worthy local charities.

Dr. Zyrowski and I, as part of our daily routine, both engage in various practices of gratitude. Both of us, were so thankful to meet so many people who are committed to make the world a better place through loving and faithful service. The kindness of each volunteer and coordinator that we met throughout the event was really refreshing. Aren’t you so grateful to know that you are surrounded with people who know that things can be different and work toward that end?

As health care providers in this community, our hats are off to you, who volunteered, ran, gave or contributed in anyway to this cause. You have and continue to make a difference…so THANK YOU!

Let us share with you some other, lesser-known ways, that you made an impact in the world.

In another fascinating research experiment, published in the “Proceedings of the National Academy of Sciences,” it was demonstrated that acts of kindness can ‘go viral’ and not only effect the giver and receiver of the kindness but spreads like the common cold, further along, like a ripple in a pond. So to all who participated, thank you for making the world a better and healthier place!